Let’s run through a hypothetical. You’ve found the perfect practice. It has a great staff, good location, healthy client base, the works. It’s even right in your price range … or at least it should be. Unfortunately, this seller has wildly overvalued their practice, and nothing you say seems to be getting through to them. They’d have a ready and willing buyer, if only they’d be reasonable about the listing price.

What can you do? I’ll answer that in a bit.

First of all, it’s important to understand why this often happens. Dentists, like anyone, take pride in their work, and this is especially true when a dentist has spent 30+ years building and maintaining a successful practice. It’s understandable that a selling dentist might have an inflated opinion of the monetary value of their practice. So approach valuation conversations with some charity and empathy. This may be enough to get a productive conversation going.

Sometimes in these cases, a seller has heard something anecdotal, totally out of context — or both — and now they’re running with it. I once worked with a buyer whose potential seller listed his practice at three million dollars. Why? Because he’d seen that someone on a Facebook group had gotten that amount in his practice, and he thought they were similar practices. But recall from last week’s entry that there are a lot of possible factors that should go into a practice’s valuation: 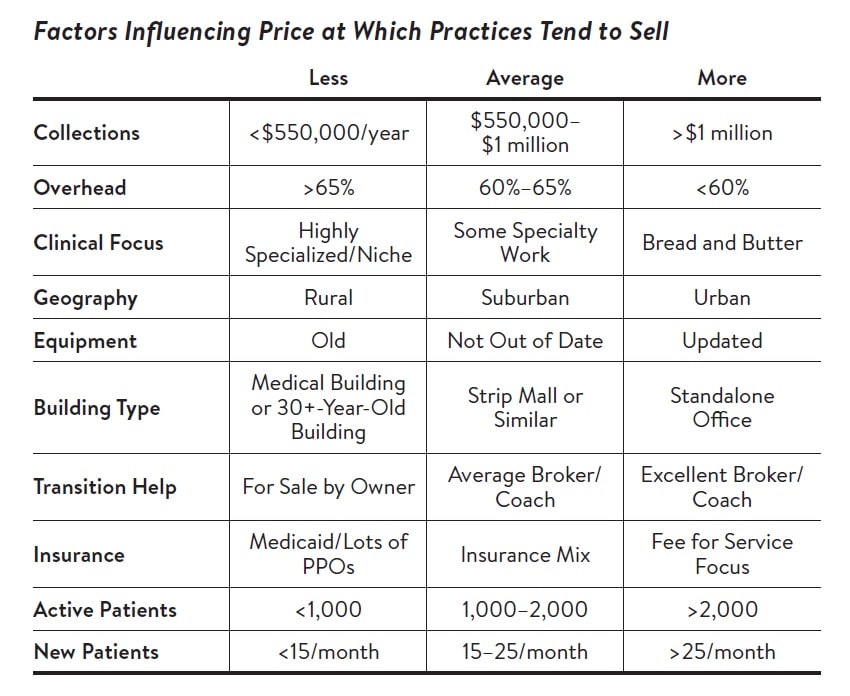 (Spoiler alert: the situations weren’t very similar. What the seller didn’t know — until I tracked down the information in an attempt to convince him — was that the other practice he’d heard about was purchased by a DSO with some intense strings attached. And it wasn’t like the DSO was cutting the seller a single $3M check, either.)

This seller thought: “I have a great practice too! It sure would be nice if I could get three million dollars for my own retirement.”

It sure would! Unfortunately, this practice was only worth about two-thirds that amount, and nothing the buyer or I could say would get him to budge. The sale never happened.

This is the seller equivalent of something I see sometimes from buyers: negotiating for its own sake. Buyers sometimes obsess over not ending up on the “short end” of a deal. And sellers do the same thing.

Like the overzealous buyer trying to shave another $10,000 off an asking price of $1.25 Million, an overzealous seller can get caught up in the emotion of a sale and end up digging their heels in over asking for $3M instead of the $2M the practice is worth. It could be about the personal satisfaction of knowing they built a multi-million-dollar practice, or maybe it’s the nice round number they get to brag to their buddies about on the golf course. Whatever the reason, it leaves you, the buyer, in a tough spot.

So we come back to the real question here: what can you do about it?

The first, and most likely option you’ll take is to walk away. If you have other practices to consider, or if the seller seems absolutely set on the inflated asking price, then save yourself the inevitable stress and heartache and simply back out of the purchase.

Walking away may not be your first choice, though, if the practice is especially attractive. Instead, you may be able to jumpstart negotiations by bypassing the seller’s emotion and hitting them with logic. Try asking some questions aimed at getting them to reconsider their asking price:

As a last resort, you might offer some contingencies to keep the sale moving forward. A contingency offer might look something like this: “I’ll agree to your price, but I’ll only pay 80% upfront and the other 20% when the practice meets some production targets we agree to.” Contingency offers don’t often work, and usually leave a sour taste in the mouth of everyone involved in the deal. So while they are a possible solution, I tend to avoid them.

If you come across an attractive practice for sale, but it’s clearly overpriced, you may be able to employ these techniques to find a way forward. But sometimes you just won’t be able to talk an intransigent seller into reality, no matter how badly you want to buy their practice. Recognize if that’s the case early on, save yourself from undue stress and frustration, and move on to the next practice.